Unless you’ve been living under a rock for the past couple years, you most definitely have heard of Nicole Arbour and her infamous “Dear Fat People” rant.  If you haven’t, here’s a video summing up what happened when she attacked people who are overweight (her original video is no longer available):

When her video first offended our delicate eyes and earballs, it blew up and became viral immediately.  Why?  Because people were pissed that’s why.

She later claimed the video was satire, meant to be a giggle-giggle-tee-hee way of empowering people to eat less and exercise more. But here’s the thing Nicole. If you need to explain why your joke is funny, and then blame others for not “getting” your joke, IT’S NOT A JOKE.

Ok, that’s enough talk about someone trying to be funny and just completely missing the mark. I wouldn’t know anything about that!

So why am I bringing her up?

People can be mean

Currently, the seemingly last prejudice that is still somewhat acceptable and kinda encouraged, is against overweight/obese people.  Well, that and the poor innocent redheads. WHEN WILL YOU LEAVE US ALONE TO EAT SOULS IN PEACE? With our country so drastically divided on the political front, it seems pretty united on a few beliefs about overweight folk:

Most people don’t even know where their spleen is located, yet suddenly become experts on the human body when presented with the opportunity to provide unsolicited dietary advice. 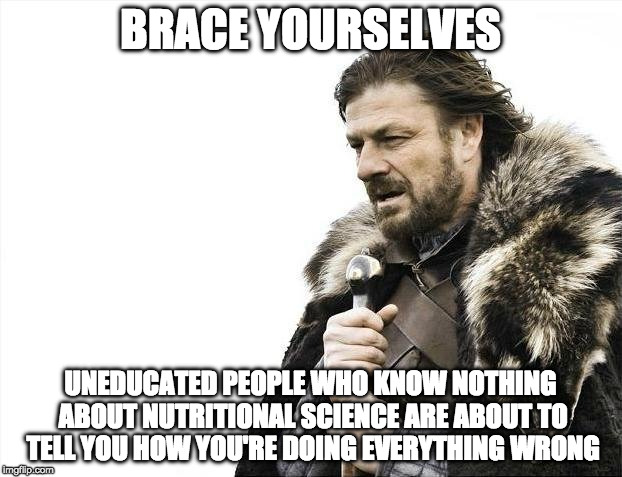 In my extensive years of researching health and nutrition, I have come across many reasons as to why people could be overweight that has ZERO to do with how much they eat or exercise.  I want to share this info for two reasons:

Before I get into the nitty gritty, let me first say that yes, there are definitely people who choose to be overweight because they don’t care about eating healthy or exercising.  I personally know people like that and they are quite happy with the way they are. I am not talking about those people today folks!

Lastly, before all the HAES and IE dietitians @me, I am not insinuating that everyone should lose weight. I am using the terms “overweight” and “obese” to describe a person with excess fat on their bodies. What determines whether fat is “excess” or not is different for every person.

The human microbiome is an incredible, extremely detailed, and fairly new focus of research. So I don’t want to get too detailed here. However, it’s a perfect example of how there may be microscopic, crazy things going on in our bodies we’re barely beginning to understand.

Numerous studies have found that the bacteria in our gut can influence whether we’re overweight. Overweight/obese people have different gut microbes when compared to those who are not overweight. The debate rages on about which type of microbes cause obesity, but so far studies are pointing towards firmicutes being the culprit. There have also been links between low diversity of gut microbes and obesity.

One study introduced bacteria from the intestines of obese mice into the intestines of thin mice. Without any change in diet, caloric intake, or exercise, the previously thin mice became obese. This is a perfect example of how bacteria can override so many factors and cause weight gain.  Isn’t it fascinating???

There was this shocking case where a woman received a fecal microbiota transplant (yes, this happens and it’s pretty freaking amazing and saves lives) from her daughter (who was overweight) to cure her of C. difficile (a life-threatening, antibiotic-resistant bacteria).

Before the transplant, the mother had a normal body mass index and never had a weight problem. Three years after the transplant she was classified as obese.  This gain occurred despite being on a medically supervised diet and exercise program.

Dear all you “calories in/calories out-it’s-simple-science-duh” folks, what you gotta say now?

It’s generally agreed upon in the medical community that we are overusing antibiotics. This is because frequent use of antibiotics can cause gut dysbiosis (explained below). Oh, and overuse can also potentially force us back into the dark ages where we can no longer cure people of bacterial infections. No worries.

Antibiotics have saved millions of lives, but with every positive comes a negative. While antibiotics save us by slaughtering pathogenic microbes, they also slaughter the nice microbes that protect us. Most antibiotics are like justice: totally blind yo.

They don’t care who you are, or what your story is; if you are bacteria, you is gonna die. This can cause gut dysbiosis, which is defined as an imbalance in your microbial community. This has been linked to inflammatory bowel disease (IBD), irritable bowel syndrome (IBS), diabetes, cancer, cardiovascular disease, and so many other issues.

And yes, you guessed it folks. Gut dysbiosis caused by frequent antibiotic usage can lead to weight gain. The meat and poultry industry has known this for years! This is why they give antibiotics to their animals.  In some cases it is to prevent disease (because they raise these poor animals in disgusting environments), but it’s mostly to promote growth, a.k.a. making them accumulate fat because we think it’s so tasty.

Omg, there are so many hormonal culprits that I’m just going to list a few.  We don’t realize how much our hormones influence our weight and uh, pretty much everything. You could eat your perfect amount of prescribed calories, nothing but healthy food, exercise like a champ, and you’ll still put on weight if one hormone is on vacay.

I will list the issues here and link to in-depth explanations so you can research on your own. Otherwise this post will become a book! Apparently 60% of Americans are on some type of prescription drug. Many of these drugs can cause unwanted and “beyond your control” weight gain. Yet another reason to blame ol’ ma and pa for well, just being your ma and pa. Genetics can play a role, although a much smaller one than previously thought, in whether you’re predisposed to being overweight.

For example, you’ll have a higher risk of developing obesity if:

These are only the ones we’re aware of!

Have we shut up the haters yet?  Oh, what’s that you say?  You STILL believe it’s only about calories? Okie doke. I’ve got more for you.

There’s a huge difference between a food allergy and a food intolerance or sensitivity.  A food allergy can be severe, causes an immune system reaction, and in some cases, send you to the hospital.

A food intolerance/sensitivity is something your body doesn’t like or can’t properly digest. Having one can cause slow-building, systematic consequences as opposed to anaphylactic shock, which is more immediate. Food intolerances/sensitivies/allergies can cause systemic inflammation, which can lead to weight-gain.

I’m sure there’s more, but this list covers most of them!

According to research, about 40% of Americans aren’t getting the recommended amount of sleep! Ask yourself, when was the last time you woke up refreshed and full of energy? And according to a meta analysis involving 630,000 participants, lack of sleep or lack of good quality sleep is linked to an increased risk of obesity. One study observed that short sleepers needed to make 30% more insulin than normal sleepers.  An increase of insulin is associated with increased appetite. This may explain other studies reporting that those who sleep less tend to eat more.

So what can disrupt your sleep?

*Note: I will write a future post about how to get better quality sleep, so stay tuned!*

What did we learn here?

There is a plethora of reasons for someone to carry excess weight on their body. Many of which are completely out of their control. Also, the human body is an insanely awesome and complex machine that can have 1000 things wrong with it.

How about, before you judge someone with little to no knowledge about their actual situation, educate yourself first, eh? Wouldn’t the world be a better place?

And for those who are trying to lose weight and experiencing difficulty, investigate any of the issues listed above as a possible cause. Please know that it is your body and no one else’s uneducated business!