I realized recently that I could write a blog post every day addressing how we’re all getting screwed by companies and would have enough content for a hundred years. Even with my eyes so open, sprinkled with distrust for everyone and everything around me, I realize I’m a victim almost weekly. These…guys…are…good.

A couple months ago I had another “OOOOOh, you guys got me!” moment over disposable razors. I was angered by how quickly my Venus-de-Milo-50-blade-extra-cushin’-for-da-pushin razor would become dull, especially considering how bloody expensive blade replacements are (they keep blade refills behind locked cabinets in Walgreen’s because enough people would rather risk jail time than pay for those suckers).

The history of razors

I thought back to the olden days (yes I was contemplating history in my shower! You should hear what I think about on the toilet…) and realized there was no such thing as disposable blades back then. I’m not going to go hundreds of years back, but as recent as the early 20th century, people were either going to barber shops to get their hair whacked, or they were using a straight razor; something you could reuse and sharpen pretty much for life.

Then this jerkface came along (even his name and hair is jerky), King C. Gillette, and changed the razor scene forever:

He decided to create disposable razors using the “loss leader concept”, which basically means selling you the body of the razor at a low price, so that he can make millions selling you crappy replacement blades that rust and become dull quickly. Ever heard of “planned obsolescence” in the car industry?  It’s basically that.

If you still don’t get it, here is my explanation in idiot terms:

“I am going to sell you a cheap product BUILT to require constant crappy refills, tricking you into thinking you’re getting a deal at first. but you’ll really end up paying way more than if you bought a normal, well-built product in the first place.”

What a jerk. I hope his mustache falls off. In his defense, he didn’t come up with idea, nor was he the only one. But he became the most successful at it.

We spend tons of money on razors that are built to wear down after a few uses so we’re are forced to buy new ones. Think about it this way: Would you buy a fancy kitchen knife handle that requires you to replace the blades every week or so? Now it sounds kinda weird, right?

But wait! There’s hope for your razor!

You have two options:

1. You can purchase a straight razor and never have to purchase another razor again.

OR, for those of us too scared to do that…

2. Sharpen your dull disposable razor on a pair of jeans or a towel. WHAT? What’s that you say?  How does that make sense?

Honestly you guys, I don’t even know. And who really cares, because it works! I think it works because the jeans/towel act as a more delicate version of the leather strop men used back in the day to sharpen their straight razors… 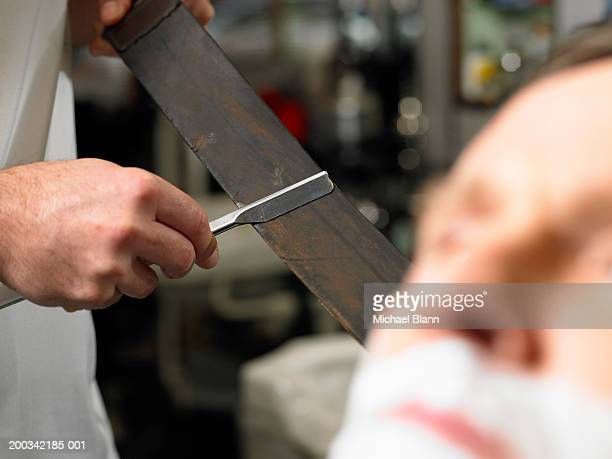 But anyhoo…A couple of months ago, I stumbled upon this little gem of a trick and tried it out. I have currently been using the same Venus blade for months and am still getting a close shave.

My mind and the hair on my legs was blown. Every time I feel like the razor is getting a little dull, I drag it 10-15 times down a pair of jeans or a towel, then flip the razor upside down and do the same thing in the opposite direction. Don’t worry, the razor doesn’t harm your jeans or the towel.

Here’s a video explanation of the technique:

Try it out folks and experience the magic of no longer being a slave to “King” Gillette. What…a…turkey.

There’s also a great company that decided to give the razor industry the finger by creating a program where you can get razor blades for $1 per month. Whether you’re interested or not, watch the video because it’s HILARIOUS:

Can someone please get me this guy’s digits so I can marry him? AMIRITE folks???

One last tip: Another way to prolong the life of your razor is to dry it after you’ve used it. You can do this by wiping it on a towel (hell, kill two birds with one stone and sharpen your blade while drying it) or dipping it in alcohol.

Why You Don’t Need Shaving Cream